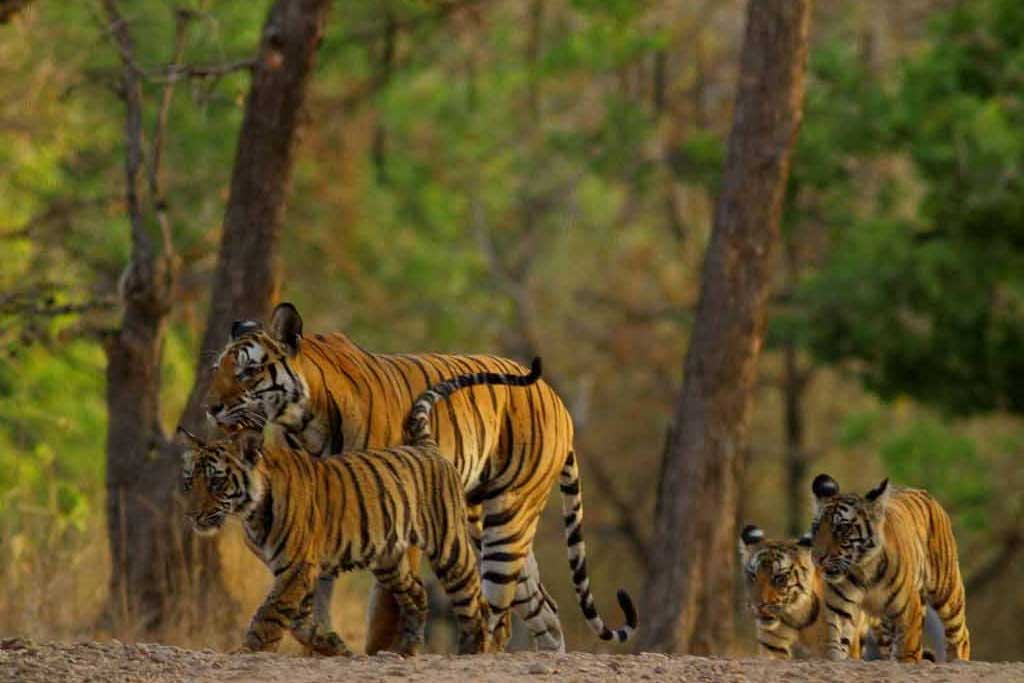 Cuddled up in the eastern zone of Rajasthan, Sawai Madhopur is one of the prominent conurbations of Rajasthan. Popularly known as the ‘Gateway to Ranthambore’, the town has seen many historic episodes and reigns. Sawai Madhopur has partly plain and partly undulating hilly terrain. The South and south east part of the district has hills and broken ground which form a part of a vast track of rugged region enclosing the narrow valley of the Chambal river. Surrounded by Vindhyas & Aravalis, this place is a treat for adventure enthusiasts as well as the ones with a fascination for history, with the Ranthambore National park- the most renowned national park in northern India and the Ranthambore Fort which was recently included in the list of UNESCO’s World Heritage sites, being the main attractions.

Passed on from the Chauhan Rajput king, Govinda to Vagabhatta, from RanaKumbha to Akbar and Aurangzeb, the city has been patronized by almost all the rulers. Beautification and renovation of the city has been regularly undertaken in almost all the regimes. Under the rule of Rao Hammir, the last Chauhan ruler the Ranthambore region prospered magnificently. In ancient India the region was more popularly known as Ranthambore. It was much later that it received the name, Sawai Madhopurfrom Maharaja SawaiMadhoSinghji I who is believed to have given the city its current plan in 1765 AD. During the British Rule Sawai Man Singh built a railway line between Jaipur and Sawai Madhopur. As a result it became accessible from a central spot in the state of Rajasthan. Today it has grown as one of the popular tourist destination in India.

Come explore the wonders and sites that Sawai Madhopur has to offer.

The noteworthy Ranthambore Fort was built by the Chauhan rulers in the 10th century. Due to its strategic location, it was ideal to keep the enemy at bay. The fort is also related to the historical legend of the royal women performing ‘jauhar’ (self-immolation) when the Muslim invader Alauddin Khilji laid siege on this fort in 1303. The fort is characterised by temples, tanks, massive gates and huge walls.

Enshrined in the Puranas, the Ghushmeshwar Temple is believed to be 12th or the last of the Jyotirlingas of Lord Shiva. Situated at the Siwar village in Sawai Madhopur, this temple has many mythological stories weaved around it. The most prominent, and popular story tells of the greatness of Lord Shiva, who resurrected his devotee Ghusma’s son, and even promised to abide in Devagiri hills as Ghushmeshwar after her name, Ghushma.

About 23kms from Karauli stands the Kaila Devi temple dedicated to the Mother Goddess. In the months of March-April and September-October, devotees celebrate the colourful Kaila Devi fair and worship the Goddess for the fulfilment of their wishes.

Located on the banks of Gambhiri River, stands the pilgrimage site dedicated to Sri Mahavirji, the 24th Jain Tirthankara.This temple has a long story of existence and is known to be one of the miraculous pilgrimages of Jains.

Situated 14 km from Sawai Madhopur, the Ranthambore Park gets its name from the Ranthambore Fort situated within its boundaries. The National Park, situated amidst the Aravalis and Vindhya ranges is spreads over an area of 392 sq.km of thick forest punctuated with pleasant waterfalls. It is home to the elusive tiger, other animals found here include chinkara, sambhar, cheetal and over 300 species of birds.

Be a part of the festivities and traditions that Sawai Madhopur has to offer.

Lakhs of people from different parts of the country come to take part in the Kaila Devi fair of the Karauli district. This fair takes place in the month of April-May Navratras. This beautiful fair in the month of Chaitra witnesses various rituals and activities like KanakDandoti, Mina performers and ladies joining the celebrations. This fair is something you should not miss.

Every year in the months of August-September, thousands of people gather at the temple of Ranthambore Fort to celebrate the birth of Lord Ganesha. The temple celebrates three whole days of Ganeshotsavwith great fervour and on the last day the replica of the Ganesh Idol is taken out and submerged in the water pond nearby.

The Shri Mahvirji Fair is held at the Chandangaon village in the memory of BhagawanMahaveer. This fair takes place from Chaitra Shukla Navami to Baisakh Krishna Ekam annually.

An annual fair is held at the Shiv Ratri Ghushmeshwar Mahadeo in village Siwad, 40kms from SawaiMadhopur and 3kms from Isarda Railway Station. It is celebrated with great fervour and gaiety. The entire town dresses up and participates as one. Rituals older than 600 years are still practiced and followed during the fair. Performers and artists add to the mood of the region by presenting the best of their work.

Engage in the many activities, tours and adventures that await you in Sawai Madhopur.

One of the best ways to observe wildlife at the Ranthambore National Park is through a safari. Located 14 km from Sawai Madhopur, the park is at the junction of the Aravallis and Vindhyas range. Apart from the royal Bengal tiger, you can also spot sloth bears, leopards, jackals, foxes and hyenas. Exotic species of birds found here make it a bird watcher’s paradise