Immerse yourself in the intriguing sagas of forts and palaces, and embark upon adventurous escapades to the wilds, all from the luxurious environs of the train. This train is newly-built and melds contemporary style with royal affluence. You will be delighted with the magnificent interiors, sumptuous meals, expensive wines and the personalised service of the Khidmatgars, the likes of which you would rarely experience.

The luxurious Royal Rajasthan On Wheels takes you on a seven day exploration of Rajasthan. The magic begins at New Delhi and continues throughout the splendid journey.

Royal Rajasthan On Wheels offers you a choice of deluxe saloons to choose from. 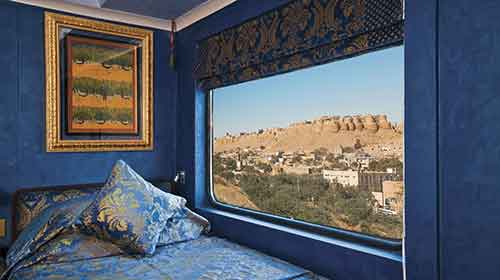 The Bravura Suite is a super deluxe saloon that opens its doors to spacious living, complete with the comforts of a royal suite. The exquisite silk and velvet bedspreads, draperies and the finely carved wooden furniture take you to the era of grand living. 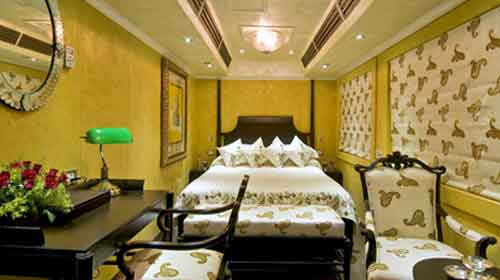 The Extraordinary Suite, or the deluxe saloon, is your personal imperial chamber. The saloon has been designed to live up to the grandeur of contemporary princely living with elegant silk furnishings draped for a befitting aesthetic appeal.

There are 13 Splendid Saloons, deluxe coaches, which have been named after the famous palaces of Rajasthan.

You will be amazed by the gracious hospitality that greets you on the Royal Rajasthan On Wheels. The warm welcome and the attentive service will win you over. The meticulously trained attendants, your Khidmatgars, will serve every need of yours.

Take A Tour-Royal Rajasthan On Wheels 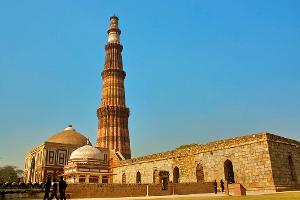 Delhi you will be treated like Maharaja & Maharani on welcome by garlanding, Tikka and turban with glass of wine. The Capital city of modern India a city known for its rich valorous and exotic history. Once the fabled city of the heroes of the Mahabharata and ruled by the Rajputs before they were displaced by foreign invaders. The tour starts in the evening with a ceremonial welcome aboard the Royal Rajasthan On Wheels at Safdarjung New Delhi. You will be introduced to your fellow travellers. Feel free to explore your new palace, and acquaint yourself with its various facilities. Relax with a drink at the bar. Dinner will be served on board in its two restaurants. 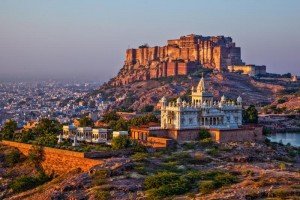 Jodhpur, the land of majestic and mystic glory welcomes you. Currently, the second largest city of Rajasthan, Jodhpur was established in the year 1459 by Rao Jodha, a Rajput king. The weather in this erstwhile state is always bright and sunny, hence has earned another title of the Sun City. In this royal paradise, you will find the most ordinary houses on street sides with exquisite stonework, traceries and carved latticed windows.

The magic of imperial living comes alive when you visit some of the finest specimen of Rajput architecture viz. the lavish Umaid Bhawan Palace.The mesmerising royal charm has not left you untouched by now. You will begin the next regal escapade at Sawai Madhopur. 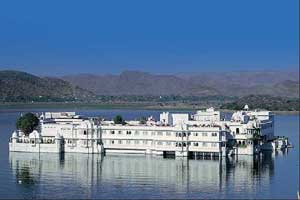 The land of marvellous beauty, Udaipur is named after the dynamic ruler of this princely state, Rana Udai Singh. The scenic beauty of Udaipur has earned it various titles in superlatives. This City of Lakes has a long glorious history and is also considered as the romance city of Rajasthan with endless love sagas of its rulers.
Jag Niwas, the City Palace, one of the largest palaces in India, is an interesting blend of Rajput architecture and Mughal interiors that carve this fortress as a distinctive structure. The palace also homes a well-maintained museum that upkeeps the armoury, costumes and other belongings of its rulers. The other captive interests in the mystic land are the Lake Palace, the Jag Mandir and numerous other forts and temples. 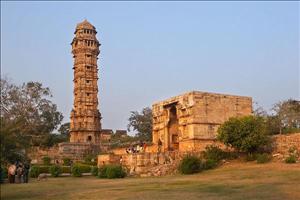 Chittorgarh, the land of glory and valour is bound to leave you enchanted. The history of this captivating place is intriguing and spellbinding. The land of devotion and determination, Chittorgarh has produced some of the greatest devotees and courageous warriors in the history of India. Chittorgarh remains replete with historic associations and holds a very special place in the hearts of Rajputs, as it was a bastion of the clan at a time when every other stronghold had succumbed to invasion.
Chittorgarh Fort, the gigantic citadel was built in the seventh century and stands witness to chivalry, valour and honour postulated and lived by the Rajput rulers of that era. The fort is dotted with innumerable monuments and beautiful temples. The Vijay Stambh, tower of victory was erected by Rana Kumbha to mark his triumph over the Sultan of Gujarat. 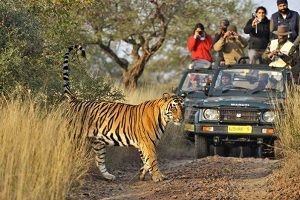 After the exquisite palanquins and architectural landmarks, the perfect place to experience the other side of the royal charm is Sawai Madhopur. Named after its king, Maharaja Sawai Madho Singh I, this place is in close proximity to the famous Ranthambore National Park.
The wilderness of Ranthambore envelopes an aura around you to explore the land of the majestic tiger. This wildlife park is home to various species of animals but the ones that capture most attention are the graceful tigers. The time spent at the National Park is full of adventure, exploration and wonder. Amidst the forest, are the ruins of the ancient fort from the tenth century and the heroic tales associated with it fill you with admiration. 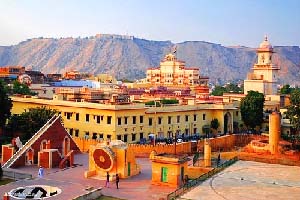 Now you will be welcomed at the magnificent Pink City, Jaipur. The city with graceful architecture in a unique pink colour was established in the year 1727 by the then Maharaja, Sawai Jai Singh II. Jaipur is known as one of the well-planned cities of its time. The capital of Rajasthan, Jaipur is predominantly known for its musicians, artisans and craftsmen. Today, it is visited for its fine jewellery, varied textiles and sumptuous cuisine.
In this diverse land of rich cultural heritage, you’ll be first treated to a visit at Hawa Mahal, the Palace of Winds. This was built for the royal ladies to watch the processions through the myriad windows of the palace. This five-storied palace was also used to store artefacts by the royal family.
After such an enthralling ride, you visit the Jantar Mantar; the largest observatory built by Maharaja Sawai Jai Singh II between 1727 and 1734. The next in line of exploration is the City Palace. A defining architectural marvel of Jaipur, the City Palace was the residence of the Maharaja of Jaipur in the eighteenth century. 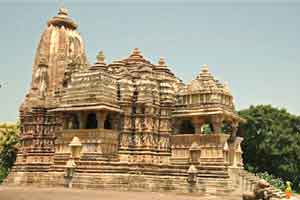 Khajuraho was the capital of the Chandela Kings, now famous for its magnificent temples. The temples were built by Chandela dynasty between 950 A.D. and 1050 A.D., are example of Indo Aryan architecture dedicated to Lord Shiva, Lord Vishnu and the Jain Tirthnkaras, the temple show case the art and architecture of medieval India. The Khajuraho temples have declared a world Heritage site. The Temples of Khajuraho are divided in to three geographical groups western, eastern and southern.

The temples of Khajuraho are a confluence of spirituality and eroticism frozen in exquisitely embellished architecture. These temples are located in a quaint little village with a rich cultural heritage almost in the middle of nowhere in Madhya Pradesh in the heart of India.

The amouous carvings are confined to the external walls as if to purge the earthly desires outside before entering the sanctum of spirituality. It is also seen as a “a strange union of Tantrism and fertility motifs, with a heavy doses of magic”. Another theory explains the erotica depicted on the temples as an exposure to prepare the “brahmacharis” for the worldly role of the house holder and acquaint them with real earthly passions. 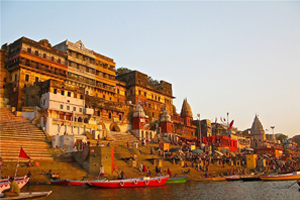 Varanasi is the oldest city of the world. Varanasi is more than 3000 years old and is famous as the city of temples. In Varanasi, there are temples at every few paces. Jyotirlinga Visvanatha Temple or Golden Temple, rebuilt in 1776, is dedicated to Lord Shiva. The Jnana Vapi well (meaning ‘Well of Wisdom’) is believed to have been dug by Lord Shiva himself.

The Ganga Ghats (river front) are the most popular pilgrimage spot of Varanasi and are centers of music and learning. The holy city has been a symbol of spiritualism, philosophy and mysticism for thousands of years and has produced great saints and personalities like Gautama Buddha, Mahavira, Tulsi Das, Shankaracharaya, Ramanuja and Patanjali.

Varanasi, or Banaras, (also known as Kashi) is one of the oldest living cities in the world. Varanasi`s Prominence in Hindu mythology is virtually unrevealed. Mark Twain, the English author and literature, who was enthralled by the legend and sanctity of Banaras, once wrote : “Banaras is older than history, older than tradition, older even than legend and looks twice as old as all of them put together” . According to the ‘Vamana Purana’, the Varuna and the Assi rivers originated from the body of the primordial Person at the beginning of time itself. 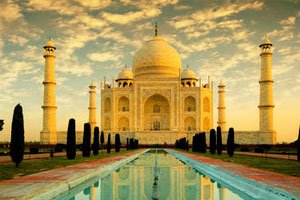 Agra is located on the banks of river Yamuna and was established in 1504 by the ruler of Delhi, Sultan Sikandar Lodi. The medieval era city, Agra is a witness of the rise and fall of numerous dynasties. The city is home to the gem of finest architectural monument, Taj Mahal.

Taj Mahal, is the mausoleum that reminiscences of the love shared between Shah Jahan, the king for his beloved queen Mumtaz after her demise. This white-marble-wonder expands on the design traditions of Persians and Mughals and is one of the most visited sites in India.

After a heartfelt visit to one of the Seven Wonders of the World, you’ll be ushered to the Lal Quila or the Red Fort of Agra. This fort is also called the Palatial City because of its enormous size. The fort was the largest state treasury and welcomed ambassadors from other princely states.

The Royal Rajasthan On Wheels is considered to be one of the world’s most exciting rail journeys. All your needs are taken care of, whether it is accommodation, dining, sightseeing as well as organised shopping expeditions. All you need to do is enjoy each day as it comes and live the royal life of the Maharajas.

The tour starts at Jodhpur and your route covers (in order) Jodhpur- Udaipur-Chittorgarh-Sawai Madhopur-Jaipur-Khajuraho-Varanasi-Agra-Delhi.